As millennials flood in and real-estate prices surge in some neighborhoods of Philadelphia, many residents won’t benefit from a rising tide of prosperity unless city leaders provide the financial and political structure to make that happen, according to a new report released today by the Philadelphia Association of Community Development Corporations.

In a wide-ranging policy platform, the group calls on the next mayor to make “targeted interventions” and roll back what it calls “inexcusable inequalities and economic segregation” that persist amid the current influx of upscale development in Center City and some other areas.

It welcomes the vitality that’s being created by projects like the Comcast tower on
18th & Arch and the new student residences on Drexel’s campus — and
the tax revenues that will flow from them — but argues that such developments alone won’t address the economic challenges that continue to confront many people in a city that has the highest poverty rate, 27 percent, among the 10 biggest American cities.

“We must recognize that the new private investment transforming some of our neighborhoods does not automatically ‘trickle down’ and benefit those who are most economically disadvantaged or struggling to remain in the middle class,” says the report, titled “Beyond Gentrification Toward Equitable Neighborhoods.”

Calling for a strategy of “equitable development,” it urges city leaders to build the “pipes and direct resources” to help people who have been hurt the most during economic downturns, but have still not benefited during better times.

While some neighborhoods, including University City, Northern Liberties, and Francisville, are seeing strong gains in new market-rate home construction and the shops and restaurants that comes with it, other low- or moderate-income areas like parts of North or Southwest Philadelphia are seeing decreasing home-ownership rates; flat or falling prices, and properties that are staying vacant for too long, the report says.

Specific policy prescriptions include requiring developers who already benefit from tax breaks to provide equivalent help such as affordable apartments or below-market rents for small business in their neighborhoods; building more of the 60,000 affordable homes that are needed for low-income residents, and increasing financial support to Neighborhood Advisory Committees that connect residents with services that can help them improve their local environments.

The report also urges help for longtime homeowners or small businesses that are being forced out of gentrifying neighborhoods by rising rents or property taxes.

But before that trend can be reversed, the city needs more data on the effects of gentrification to guide policy, the report says. It calls on the authorities to collect information on the number of homeowners who lost their properties to tax foreclosure because the neighborhood improved; on longtime homeowners who sold their properties to cash in on rising prices, and on renters who left their homes because they could no longer afford the rent.

To generate more jobs, employers should work harder to hire locally, and the city should increase its investment in commercial corridors such as Southwest Philadelphia’s Woodland Avenue, to help local businesses there.

One prominent example of the opportunity for local hiring will be the recently announced Democratic National Convention in July 2016, said Rick Sauer, Executive Director of PACDC, which provides advocacy, policy development, and technical assistance to community development corporations working to revitalize neighborhoods.

“This presents an opportunity to make sure the dollars and jobs that make the convention happen can stay here locally,” he said.

The proposed measures, which include the doubling of funding to the Philadelphia Housing Trust Fund, total $20 million a year, a sum the report calls “extremely modest” compared with the tax breaks, abatements and direct subsidies already provided to developers. The extra money for the Housing Trust Fund would come from the city. As potential sources, PACDC suggested additional revenue from the realty transfer tax, expiring tax abatements and from a new ‘linkage fee’ on new construction.

The investment would easily be repaid in terms of jobs taxes, and higher property prices, according to the report. It calculates that, in terms of houses built, vacant lots cleaned, blighted properties fixed, and other services provided by community development corporations, the combined economic impact was $3.3 billion over the past 20 years.

The benefits include 11,600 jobs created; $28 million in tax revenue generated and $680 million added to property values as a result of neighborhood improvements.

Sauer said the $20 million is affordable for the city. “The resources are there, it’s just a matter of political priority,” he said in an interview.

He argued that the time is right for adoption of the equitable-development strategy, given the improvement in the local real estate market, the growth in population, and new investment in neighborhoods.

The case grows stronger given Philadelphia’s large stock of vacant properties — 40,000 according to city estimates — and the fact that about a quarter of them are publicly owned, Sauer said.

The public ownership of buildings and land puts the city in a good position to negotiate deals in which it would sell properties to private developers in return for the provision of, for example, the green space that would help to advance the strategy, he said.

Together with the fact that the city’s leadership is about to change with the election of a new mayor, the demographic and market factors signal a real opportunity to set a development policy to provide more support for low- and moderate-income residents, he said.

“What happens in the city over the next eight to 10 years will determine how effectively we will advance equitable neighborhoods, how well we are able to attract balanced development,” Sauer said.

And that won’t happen without the involvement of city and local government and non-profits, he said.

“Unless there are intentional interventions and policies put in place to address those inequalities [they] will continue and the wealth gap will continue to widen.”

Public schools, too, will play a central role in equitable development, the report says, and it urges the restoration of full funding to School District of Philadelphia while avoiding specific policy prescriptions.

If the city does not allow all its citizens to share the benefits of rising development, it will be hurting its long-term economic prospects, Sauer said.

“In 30-40 years from now, those folks will be the majority of the work force, and if we’re not investing in them now through the education system, and expanding housing opportunities, we are setting the whole city up for failure,” he said.

The PACDC is planning to host the mayoral candidates at a forum on the plan at Temple University on April 1. 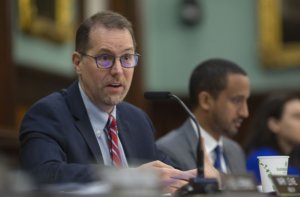